For my work I had to go to Wuhan in China, Hubei province. I stayed 2 weeks each and so I was able to look for birds during each weekend...


My first trip from the 1 to the 13 June was in the same time than a big ornithological event in Sanyang the 7 and 8 June. This village is at 3 hours by car from Wuhan. The meeting was organized by the Birding Society of Wuhan for the second time. As far as I understood, it was sponsorized by a business man born in this place. We were more than 40 birders all Chinese except me! A small group of people even came from Beijing. A photo challenge took place at this occasion with at least 3 or 4 professionals among us: probably most of the wildlife professional protographers of China! I spent really a wonderfull weekend among this group although 2 or 3 people only speak English: I want to thanks here particularly Steven who take care of  me during all this time!
The village is surrounded by rice fields and different kind of cultures with a lot of fruit trees. In some place there are still some remaining forest areas with a big colony of Herons in one of them. The weather were always cloudy with very bad light for taking pictures unfortunately. I finally won a third price but we were several in this case I think. I saw more than 60 species in less than 2 days with 40 lifers and a lot of very good memories: Paradise Flycatcher, Tiger Shrike, Plain prinia but the main one is certainly the good moment with all this people! 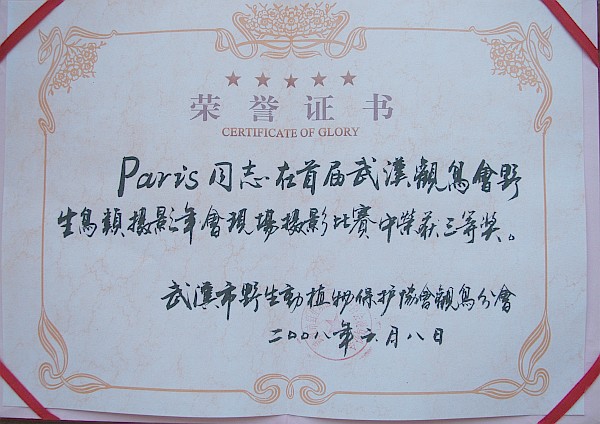 
My second trip took place between the 6 and 16 October. I found a contact in Chengdu, Sichuan thanks to birdingpal. Geraint Francis is English, married with a Chinese and know very well the Sichuan. With his wife, he funds a professional bird service tour since one year. The price is reasonable for this kind of service: 800 YUAN (75 à 80 €) per day and per person for guiding, translator and car. You have to add 150 YUAN for their expenses plus your own food, hotel, petrol, fees which is reasonable for European, at least  for the moment! I book my flight ticket thanks to http://www.elong.net.
I arrived very late Friday 10 October to Chengdu. We drove around 3 hours to Emei a tourist place with a lot of hotel. We paid 50 YUAN the room. It's the Chinese price although the price for foreigner is usually 300 YUAN!
In the morning we did 2 short walks around Emei, one leading to a beautiful Buddhist Temple. In the middle of the afternoon we took the direction to the Wawu San Reserve and we arrive for Lunch. Unfortunately the Reserve is close due to collapse of stones on the road! Since the Earthquake, there is a lot of rain until the last day and the slopes of the moutains are very tight in the place which give some wonderful scenery in fact... We had to drive to another reserve we join after almost another 4 hours drive: Laba He or in English Erlang Mountain National Forest Park.. We arrived around 5pm and although there is some landslips too, we can enter in this one fortunately! All this drive will be reward by 2 Golden Eagles, 1 Yellow-legged Buttonquail (1 lifer for the Guide) and 4 Sambas, a kind of Deer. As the place is a kind of luxury site, the room was around 200 YUAN, 20 €...
The next day, we started an 8 hours walks at 7:00 am at an altitude around 2000m, surrounding by mountains up to 4000, 4500m. Although cloudy we were lucky to be able to see the impressive scenery from time to time. All the birds are new for me and this wonderful place is populating with Squirrels and Tibetan Short-tailed Macaques and even the 2 species of Pandas. The Giant Panda lives at very high altitude at this period of time and there is no way to see it... The Red Panda is quite secretive and the guides never saw it... but we were incredibly lucky to find one!!! The return to Chengdu will be without any problem even if driving in China is always an unexpected experience!
Now, I have really the wish to visit more in depth the Sichuan with my wife and particularly the Tibet Sichuan with its moutains up to 7000m described several times by Geraint (Cid). I don't know if we will be able to do that but I think at least I will do again a weekend in November... So if you want to do a fantastic birds trip in an incridible country, this is probably a must as a destination and Geraint and is wife a truly recommendable guides... 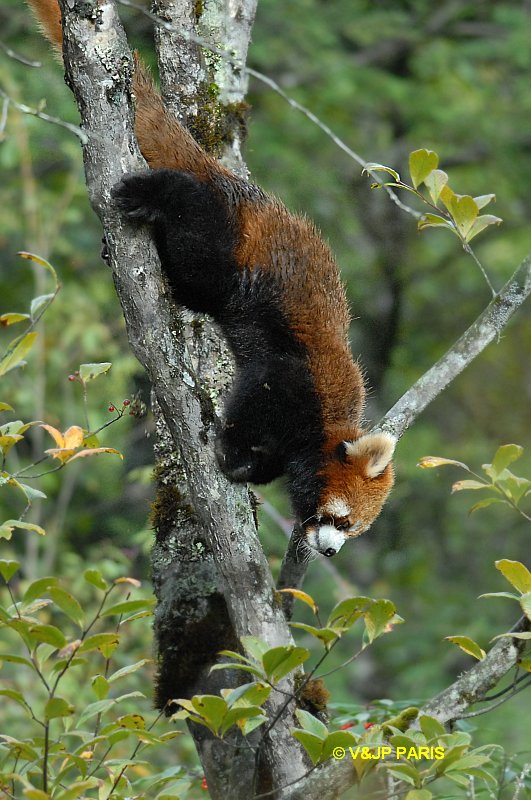 
I visited again the Sichuan with Cid and Maggie between the 8 and the 9 November. This time I arrived a little bit earlier which allow us to went to Moxi around 400 km West of Chengdu. We arrived around 1:00 and although I was very tired it was very difficult to sleep: we were already around 2000m above the sea!
The weather was good with a very blue sky in the morning and becoming cloudier in the afternoon. We started to drive until the top of the road around 4000m! We made a lot of stop at different level and saw a lot of very interesting species: Elliot's Laughingthrush everywhere at lower level, Vinaceous Rosefinch, Chinese Babax, Hodgson's Redstart first and higher Blue-fronted Redstart, a big flock with Streak-throated Fulvetta, Gray-cheeked Fulvetta, Père David's Tit, Coal Tit, Gray-crested Tit, Stripe-throated Yuhina, White-browed Bush-Robin, Sichuan Treecreeper and a lot of others in other place! Moreover the landscapes were terrific with peak around 6000m and even 7000 for one! At the top around 4000m, we did a walk to a pond almost already frozen. We were rewarded of our big effort by 1 Lammergeier and 1 Himalayan Griffon. The effect of the altitude without preparation was amazing starting by the feeling to be a little drunk and a headache I kept all the afternoon...
We had a lunch almost around 3:00 pm in the other side of the mountain. Then we continue a little bit trying to find Grandala we saw flying during our break. We were lucky to find hundreds of birds eating and drinking and finally quite familiar we us! We came back for diner to Moxi and after the log we went to sleep very early as all of us were very tired! Fortunately, this time I had no problem for sleeping...
The day after we drove in direction back to Chengdu, making several stop for birds. The weather was without rain but with clouds above 3000m. The first stops gave some interesting birds like Little Bunting, Godlewski's Bunting, Little Forktail and Eurasian Crag-Martin. Unfortunately the remaining day, the birds were very shy and we saw very few of them although in some case we were in very good place like the Old Erlang Road... We finished the weekend on the short Tea Horse Trail (Taiw Quaw) without more success: at the end only 32 species (against 40 the previous day) most of them saw in the villages: it's very strange sometimes when you look for birds! That was a nice day however and the Sichuan definitely needs a longer trip to be correctly discovered!


For this last business trip of 2 weeks, I asked Steven met in Sanyang in June to try to organize a trip for the weekend with the fact that I was ready to pay for a car and a driver if needed. He had the very good idea to contact a professional birder and photographer, Lao Lin, leaving in Nanchang in the Jiangxi Province. This town is 4 hours by train from Wuhan and it is very close to one of the most famous birding place in China: Poyang Lake and its 4 species of Crane in winter! Although Lao Lin doesn't speak English, he has the habit to guide in this area and a friend sent to me his email few months ago before my first trip.
So, Friday evening me, Steven and 3 of his friends we took the train to Nanchang. Lao Lin guided us around Poyang Lake the 6 and 7 December for a budget of 1200 YUAN per day included cost of the car (hotel and found not included) . We had a very good weather but quite cold particularly Saturday. I saw a lot of new species and first of all the 4 species of Crane: Common Crane, Hooded Crane, White-naped Crane, Siberian Crane. However the most impressive was the concentration of  Tundra Swan and Geeses: Swan Goose, Taiga Bean-Goose and Greater White-fronted Goose are wintering here by thousands. The ducks are very numerous too but except the Spot-billed Duck and one Falcated Duck only saw by one person of the group, it's mainly European species. In two days we saw more than 70 species and among them: Great Bittern which took me 5 minutes to find (!) Oriental Stork, Brown Crake, hundreds of Spotted Redshank, Common Snipe, 3 Kingfishers with one White-throated Kingfisher, Oriental Skylark, Buff-bellied Pipit ssp japonicus, Long-tailed Shrike, Marsh Grassbird, Chinese Penduline-Tit, Grey-capped Greenfinch and a lot of others!
I should not come again in China but I had a lot of very good moments and I hope to be able to see again Steven in his country or why not somewhere else! Thanks a lot to him for this very good idea... 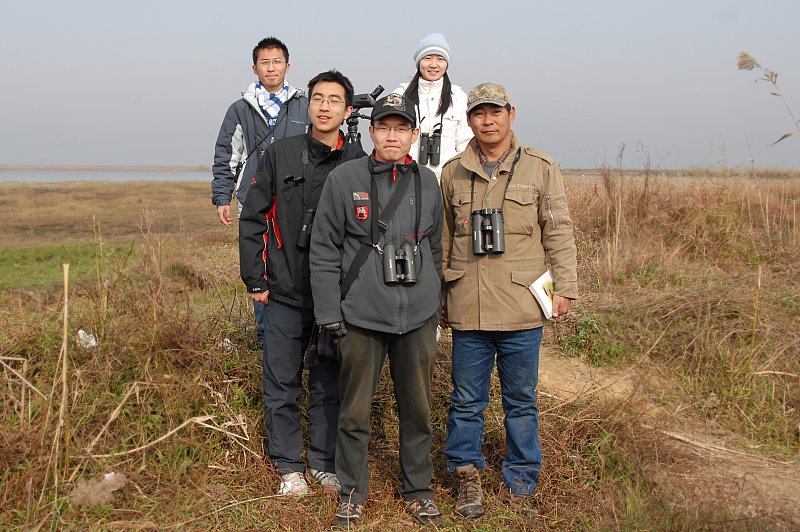